Located on the banks of the mighty Mississippi River, Quincy, Illinois is known as the Gem City and is home to the WIARC. The club has over 75 members spread across the West Central Illinois and North Eastern Missouri area.

The WIARC is a general interest club chartered to extend the knowledge of amateur radio and the art of electronics; to bring together amateur radio operators; increase interest and activity in the hobby of electronics; promote the mutual interests of its members and the public in amateur or “ham” radio operation; and provide a system of emergency communication for civil defense and in time of disaster for the protection, assistance and welfare of the general public.

Our Activities and Commitments

Club activities include an annual August Swapfest, entry level training classes beginning in January each year, an Elmer program for new amateurs, a VE Team to provide local examination opportunities, participation in Field Day as well as other operating contests and on air activities.

In accordance with the Club’s commitment to be prepared in case of a communications emergency, it has established a club station at the local American Red Cross Chapter house. The station includes 2 HF operating positions, a tri-band beam at 100 feet, a multi-band HF vertical, a multi-band remote tuned HF dipole, as well as VHF and UHF transceivers and dual band VHF/UHFantennas.

In addition to it’s many other activities, beginning in 2006 the WIARC assumed the duties of sponsor and administrator of the annual Illinois QSO Party which for many years was sponsored by the Radio Amateur Megacycle Society (RAMS). Our sponsorship continues today. Details of the ILQP can be found on the ILQP Page which is linked at left. The ILQP takes place each October and involves amateur operators in all Illinois counties as well as operators across the USA and from many foreign countries.

The WIARC also takes great pride in its long standing commitment to the public service agencies and residents of Quincy and Adams County, Illinois. Over the years, WIARC has provided emergency communications services in times of local disasters such as the historic Mississippi River floods of 1973, 1993 and 2008 as well as several tornado related events in Adams County and surrounding area. Served agencies include the Quincy Police and Fire Departments, area Fire Protection Districts, the Adams County Sheriffs’ Department, the Adams County Office of Emergency Management and the Adams County Chapter of the American Red Cross.

Our current club roster is available in PDF Format.

We’d love to have you join us. Membership is $20 per year with new licensees receiving a complimentary membership for the first year.

Just show up to any scheduled meeting or contact an officer for more information.

The Western Illinois ARC was chartered in the summer of 1940 in Quincy, Illinois by a group of thirteen local area amateur radio operators and enthusiasts. The WIARC has been an ARRL Affiliated Club continuously since 1948. Since early 1990, the club has been recognized as an ARRL Special Service Club. Due to the voluntary public service nature of its activities, the club has, for many years, been incorporated by the State of Illinois as a Not-For-Profit Fraternal Organization. 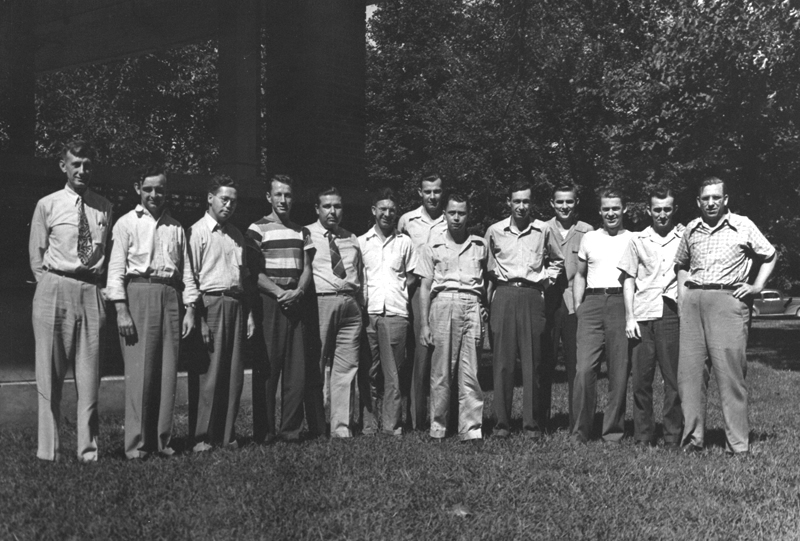 Charter members were, from left to right:

The last known surviving member of the group was Clinton Carter, W9ZWN, reportedly living in Victorville, CA. The last surviving member who remained a life long Quincy resident was Maurice Butts, W9GQK, who became a silent key February 25, 2008. Until the time of his death, Maurice remained a member of WIARC and was then a resident of the Illinois Veterans Home in Quincy. Other charter members who remained lifelong Quincy residents and WIARC members were W9OAB, W9BIQ, W9AEX, and W9BIG.